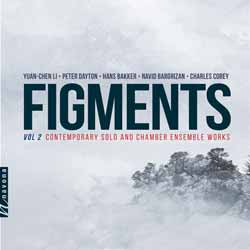 The album opens with ‘Tell’ by Yuan-Chen Li, a work commissioned and performed by saxophonist Jessica Maxfield, that joins the woodwind instrument in a holy dance with the leaping yips, gasps, and cries of the human voice. This is followed by ‘Mar de Lurín, after paintings by Fernando de Szyszlo’, in which composer Peter Dayton harnesses nylon guitar strings to paint vibrant studies in light and shadow.

Hans Bakker’s ‘Tiento I for guitar solo’ and ‘Tiento II for guitar solo’ are contemporary imaginings of a 16th-century Spanish form that are all at once aggressive, romantic and, at times, contrapuntal. Next comes Navid Bargrizan’s ’10 Aphorisms’, a series of concise musical statements coloured by contrasting timbres and scales that push the boundaries of music theory into the realm of psychoacoustics. A second piece by Bargrizan, ‘Se-Chahar-Gah’, is inspired by Persian classical music and performed on a custom-built microtonal guitar.

The album concludes with Charles Corey’s ‘Syzygy’, a four-movement work for string quartet, each one exploring relationships between tonality and dissonance; the last movement dramatically ends the album by slowly gliding to the extreme registers of the ensemble.

While experimenting with the sounds instruments can make is interesting (and immensely fun if you you’re the performer) it’s not something that you should really inflict on others. The humming down a saxophone in ‘Tell’ produces the sort of sound you’d expect a grade II student to engaging in for a laugh… when they’re a bit bored.

’10 Aphorisms’ sees random squeaks and shrill outpourings, which is more experimention in getting on the listener’s nerves than it is classical music. ‘Se-Chahar-Gah’ is basically someone randomly strumming and finger picking a guitar that sounds out of tune. Meanwhile ‘Syzygy – IV. Rays-Raze-Raise’ is mostly the sound of a whistling bomb or jet plane plummeting to earth as played on stringed instruments… It’s not really the sort of thing you want to unwind to.

But then, on the flip side of this, ‘Tiento II’ is a guitar based work that is intricate and hypnotic – the one diamond in the rough.
For those who like to spend a great deal of time listening to music that makes them wince, or constantly ejaculate: “What the hell is that?”… many happy moments you’ll experience here.